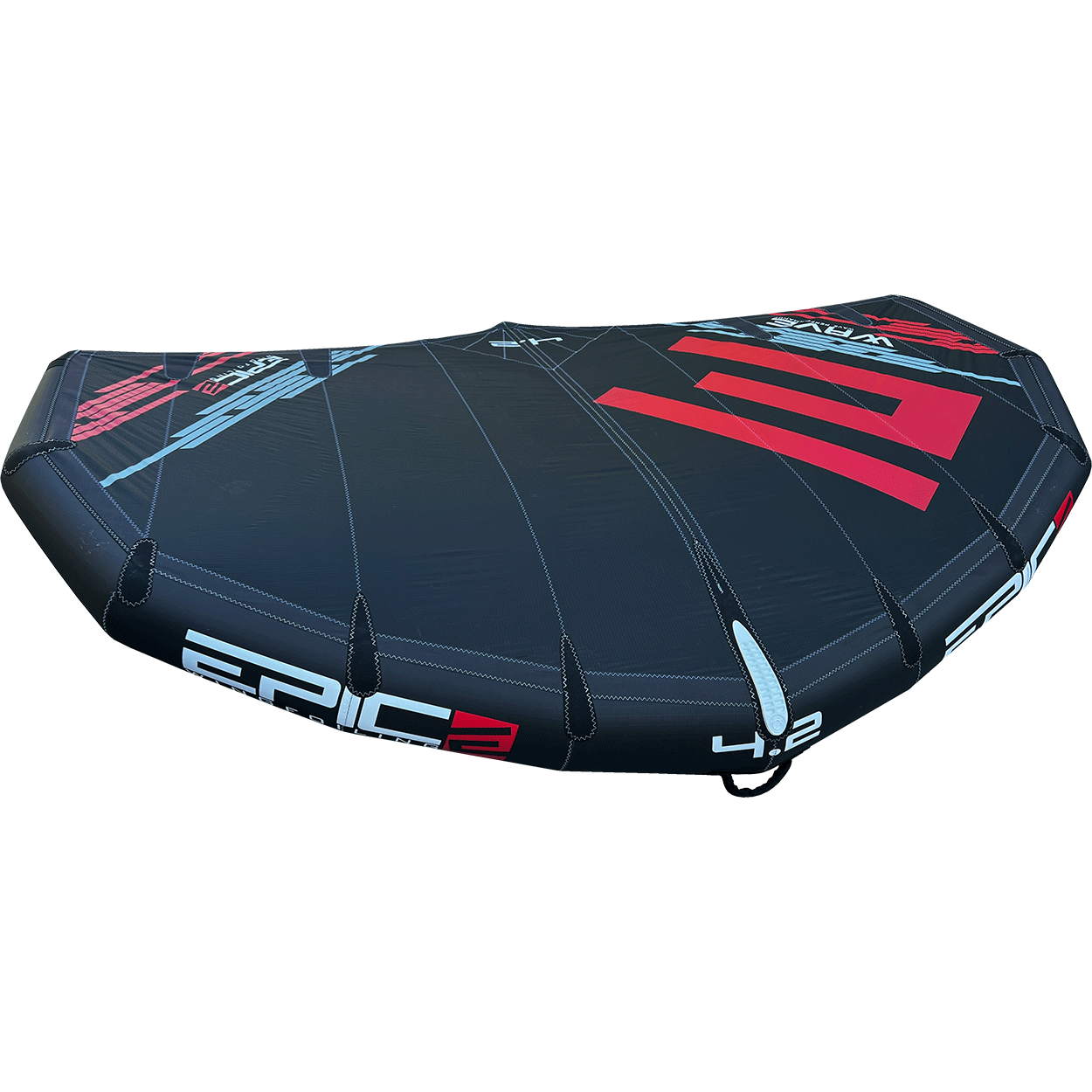 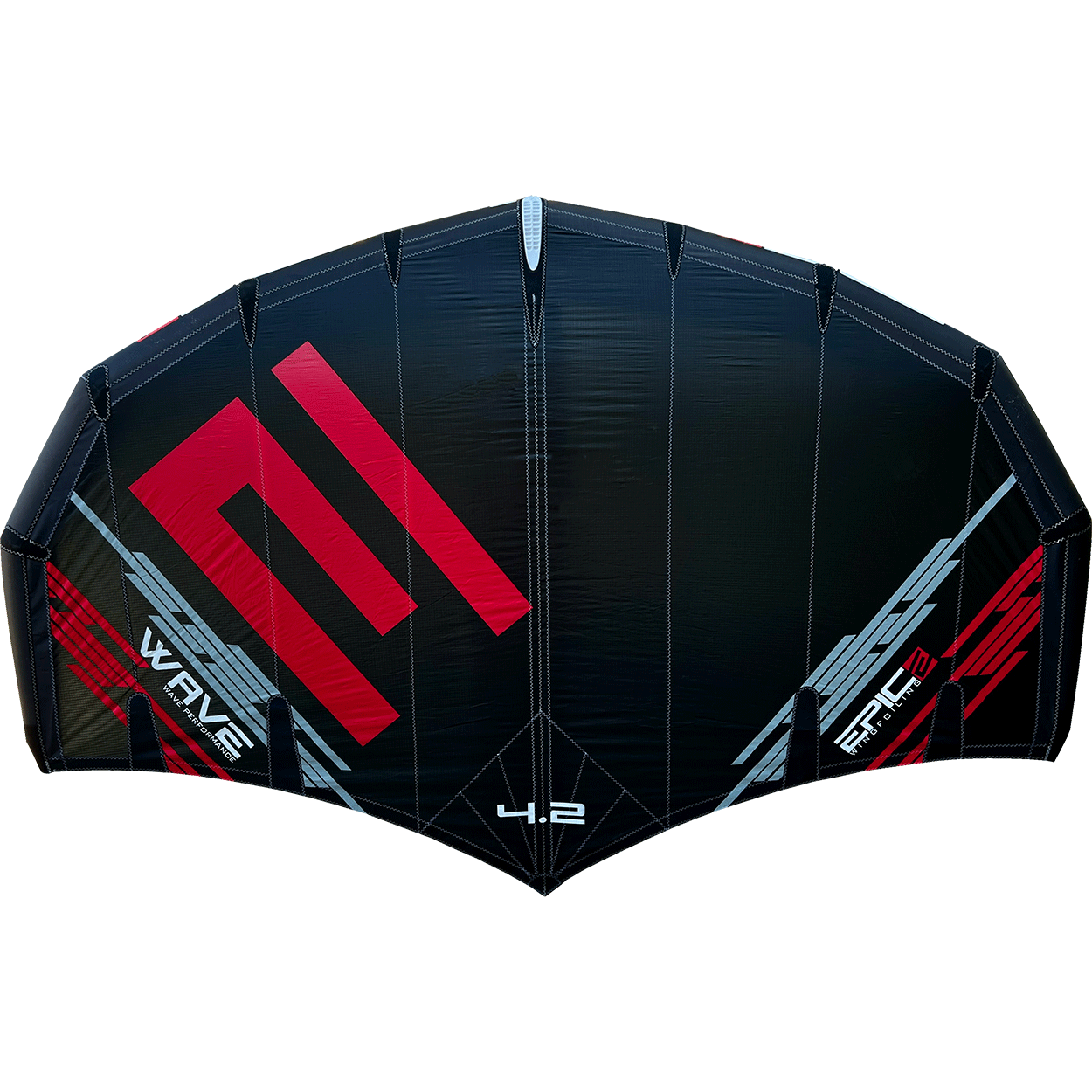 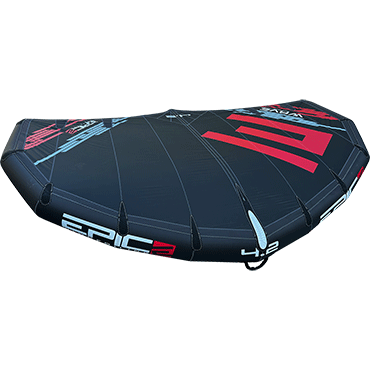 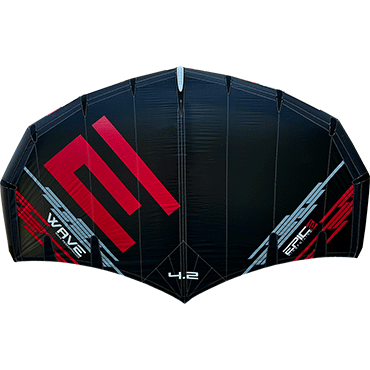 Wing design is evolving quickly and the new EPIC WAVE WING has been specifically created and tuned to thrive in the surf. If you like crushing those waves, you’re going to need a tool that was crafted to meet your every wave riding demand. Our WAVE wing will have you tearing down a wave, doing cut backs with the wing totally stable next to you and feeling like you are on top of the world.

The EPIC WAVE WING is available in  2.8 / 4.2 / 5.5-meter sizes. These sizes have been independently developed to have an incredibly responsive and intuitive feeling in any wind condition. Each wing has its own color scheme. The 2.8 meter comes in green/black, the 4.2-meter comes in red/black and the 5.5-meter comes in the yellow/black color.

We’ve packed lots of exciting features and performance characteristics into this dedicated wave wing. The stability is unmatched, whether you’re learning to catch your first set, or you’re an experienced rider. Having a rigid, stable and powerful wing will simply have you dropping in on more waves with loads of confidence compared to other wings. If you’re new to winging, the shape of our WAVE wing makes it easy for beginners to learn how to start winging due to it’s forgiving nature.

For those looking to push the limits, our wings are designed and built with durability in mind. The construction process is second to none, and it’s something we put a lot of focus and energy into. All you have to do is check the pictures of the WAVE products and see for yourself.

It is very uncomfortable to line up a wave on short notice with flimsy handles and lazy response. This is the reason why the WAVE wings come with three grab handles that are located on the strut similar to the EPIC WING V2 and GHOST models. Each of these grab handles are 35 cm long. On the WAVE wing we decided to change the shape of the grab handles and incorporated the two end grab handles into the strut by using carbon tubing as a base. We then wrapped with a thick foam which is a unique design compared to the other two models. These two grab handles have a stiffer design so that you can effectively and quickly pump to get on plane as well as easily power or depower the wing with small hand/wrist movements. Our handle design also impacts the shape of the strut creating a powerful air flow.

Waves are organic and can change shape quickly causing riders to have to rebalance themselves. To address this, the strut tips are thicker allowing the rider to dip or drag a wingtip into the water for balance. But because we’d also added more curve to the wing tips, it won’t cause excessive drag and throw you off. It’s a small detail that adds a lot of support to riding style and individual technique. The curved wing tips also prevents dipping a wing into the water for water starts. To feel that natural surf feeling, you need to be able to shut off the wings power quickly. With the rigid handles, enhanced strut stiffness and curved wing tips, it provides immediate release of power, even in strong winds. Enjoy that ride as long as you can, and then pull in to turn on the power and get back to catching the next wave. The EPIC WAVE WING has loads of low end power giving you the ability to quickly position yourself in the right spot at the right time.

We take great care in our extensive testing process to ensure our designs are perfectly dialed in. Test and demo riders were simply ecstatic. It’s a robust wing, packed with features that delivers the absolute ultimate rush for wave riders.

If you are looking for a wing that is amazing for jumping, racing, and doing freestyle tricks then take a look at the EPIC WING V2 because this model was designed specially for those things. While all of our wing models can adapt to any riding style, our line includes models that excel in specific areas. Of course you can jump and do freestyle tricks on the EPIC WAVE wing, but it won’t be 100% perfect like EPIC WING V2 won’t be 100% perfect for wave riding. Why not add different sports in the mix… our wings are just as comfortable with a snowboard skis, SUP or skateboard.

No windows needed because 70% of your riding will be on the wave while your wing will be on your side. Plus you can always tilt your wing on an angle to pick what’s on your side.
Large diameter covered inflate/deflate valve on both the leading edge and strut for quick set-up.
Large diameter leading edge for wing rigidity.
Extra Curved wing tips to improve water avoidance.
Deep profile (semi medium aspect ratio) for amazing power delivery and stability.
Luff Strut for balanced power and depower.
Large strut end.
Cavity D2 strut for the two grab handle positions for direct feel of the wing and instant easy power / depower access.
Harness line attachment points.
1 harness line set.
2 long extra rigid grab handles for expert handling and power adjustment.
1 long soft grab handle in the middle for doing tricks and for easier water starts.
Comfortable and detailed wrist leash & swivel.
Waist belt with velcro.
Versatile and expandable bag for several packing options.
Kevlar wing tip and strut reinforcement.
1 EVA padded strut protector when the wing is parked on the beach.
Robust and detailed construction all around the Leading Edge / Trailing Edge / Strut.

Boards and foil size will have to be adjusted in order to get these wind ranges.