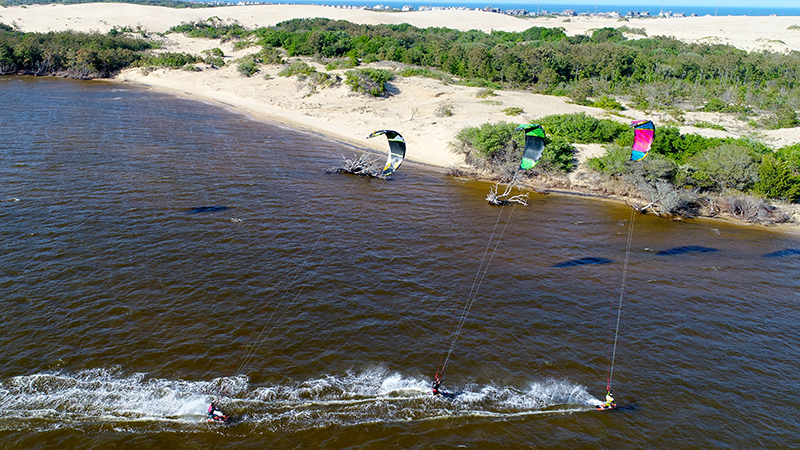 I’ve been a fan of Dimitri Maramenides’s riding and videos for some time, so when the opportunity to be a participant in ‘Dimitri’s Boot Camp’ arose, I naturally jumped at the chance and invited my good friend Jon to join me for this once in a lifetime experience. We made our way to the Outer Banks, North Carolina on April 24th for a week of hopefully great winds and inspiring progression. As it turns out the weather wasn’t going to do us any favors so we made plans to ride where we could leading up to the Boot Camp days. Dimitri was making his way from Florida but offered us the use of Stand Up Paddleboards and Surfboards to explore and occupy our downtime. Tuesday evening Dimitri shot me a text asking to meet him at his place for dinner and planning. When you meet someone of this status for the first time, it’s odd. We’ve seen riders and legends in magazines and in videos and they develop a certain status in our minds. Within minutes, however, I felt right at home and was on my way to a local eatery in the Epic van and ordered based on Dimitri’s recommendation. To get the best food, a local guide is a must. Note to anyone that spends any time with Dimitri in his hometown – he knows everyone. But not only that, he’s developed deep relationships with people. From the woman taking our order at the restaurant, to the neighbor on the next block. We overheard meaningful and respectful conversations with everyone he met and has a deep, genuine interest in people. With that said, I assume it would make it hard to get anywhere in a hurry, but for that, we’d have to ask his wife Helen. 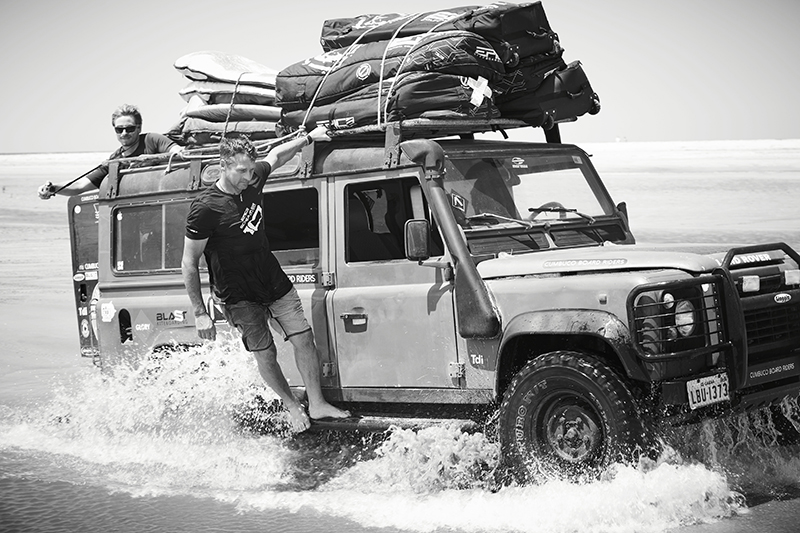 Always riding. Dimitri Maramenides at another boot camp deep in Brazil… Photo: Gustav Schmiege Wednesday morning proved to be pretty decent. The sun was shining, it was warm and the wind was up. We were ushered to Jockey’s Ridge to try to the equipment and get some good drone shots. I’ve never worked with a photographer before, but Dimitri gave us direction and off we went trying to be good models. Now and again we’d get called in for clarity and positioning. Dimitri is very specific about what he’s after. After about 20 passes we started getting the thumbs up and then went off to do our own thing as the wind was set to drop soon enough. We closed the day by reviewing the shots and ordering some spectacular takeout. Tomorrow was, by all accounts going to be the day. Brisk winds were forecast all day, and I had every intention of using every drop of sunlight. Thursday morning began at 6:30 a.m. when our internal alarm clocks and anticipation went off. We soon met Dimitri and made a plan to surf in the early hours as the wind built. But as soon as we had the boards packed, the wind picked up and we quickly changed plans to kite. I was on vacation and had but one mission – to ride until my arms fell off. 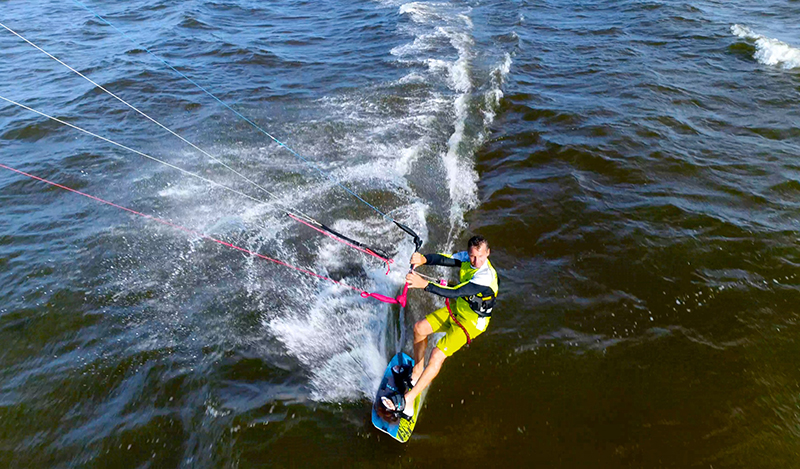 We lugged a bunch of gear to the beach and began pumping, which was super easy with the new Epic Titan pump. The wind was building through the day so we inflated 14, 12, 10 and 9 meter kites and would trade off as required. We warmed up under blue skies and temperate water and then heard barks and yells from the beach. Dimitri had a drone in the air and wanted to capture some cool angles of the new kites in a line with the dunes in the background. This time we knew what we were doing and were able to coordinate fairly easily. However… If we didn’t get it perfect, we did it again… and again, and again. We took many passes in close quarters to one another and got a mild tangle once. During one pass the drone was in front of us, nearly touching the kites when I realized that it actually passed between the lines! Dimitri thankfully has some expert drone skills. After a battery change and the addition of Mira Ptacek, an Epic Team Rider, we took about 20 more passes and got some great shots. But after 4 hours of kiting with no break, I was starting to get sloppy. But when you’re at Boot Camp, there is no rest. Seriously… none. My only break was to come in and change kites, which I tried to take my sweet time with. 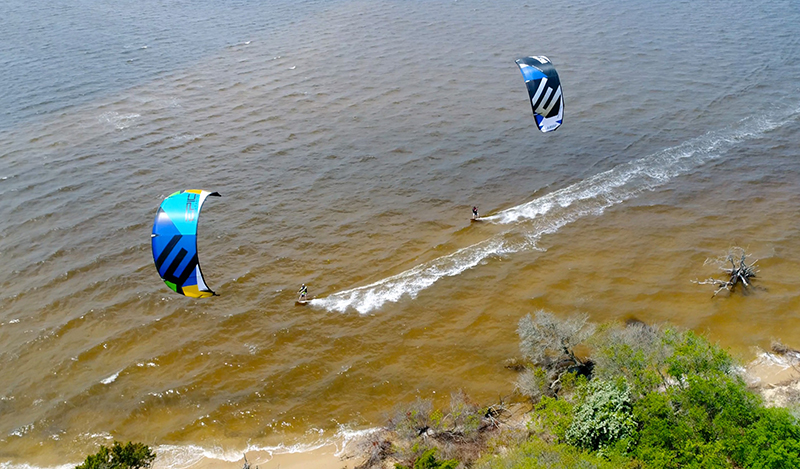 Jon at one point came in to get hydrated but was quickly turned back out. I was close to the beach and could hear Dimitri holler, “No no no no no, what are you doing? This is Dimitri’s Boot Camp… get back out there.” I was close enough to see the look on Jon’s face which was utter defeat. But he did swap to the Screamer 10-meter Limited Edition and went back out with a big smile. 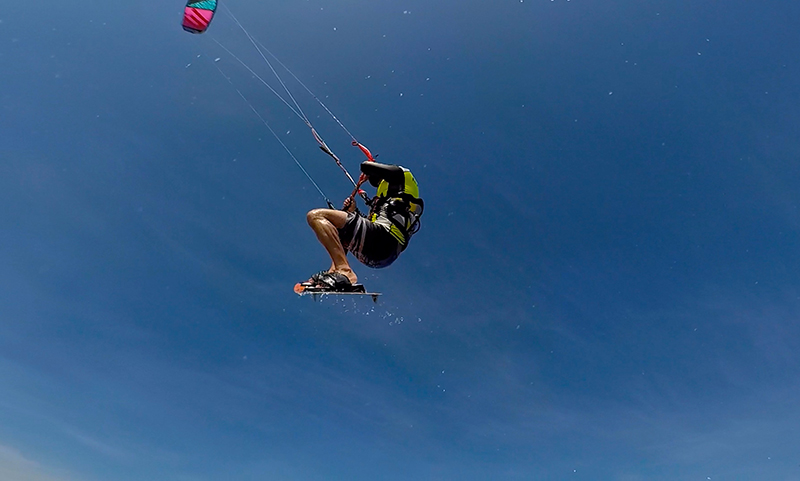 With my fingers cramping, it was clear that the sun was drying me out. I came in, grabbed a swig of water and the new 9-meter Renegade 6G and went back out. It’s at this point where things went from being comfortable to being awesome. Dimitri had waded out to thigh deep water with his GoPro and yelled for us to jump over him. Wait… what? I’ve been known to get some decent air in my time, but have never tried to jump over anyone, let alone a pro rider and company owner with a camera. On each pass, we’d hear “Pull it… push… now… go!” as we passed by our mark. The first few were a disaster with me plowing myself hard into the Pamlico Sound with an interesting and painful array of techniques. But after a few personal pointers from Dimitri, they got better and the nervousness started to disappear. I still wasn’t hitting my mark all the time because I was timing the chop, but I went right over him time and time again. After I wasn’t afraid that I was going to cut his head off, I tried to really pull it. With the technique down, I’d have liked to be on a bigger kite but that would only have made my misses worse. Jon, on the other hand, was doing awesome. He too benefitted from Dimitri’s tips and was going huge. Dimitri then suggested Jon take the 14 Screamer out. Wait… what? The 14… I was on a 9 and Jon doesn’t have that much more weight on him than I. But if you want to go big, kite choice is key. Not only did he go high, but the distance was insane. He later confessed that he was scared out of his tree at first, but his progression that day went through the roof. 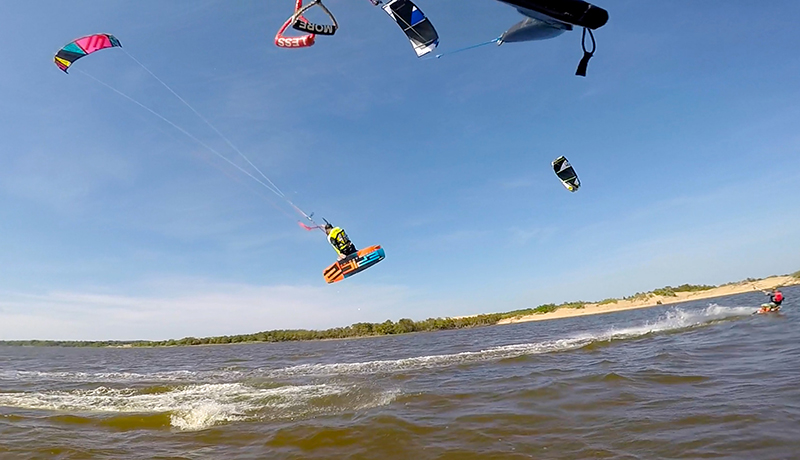 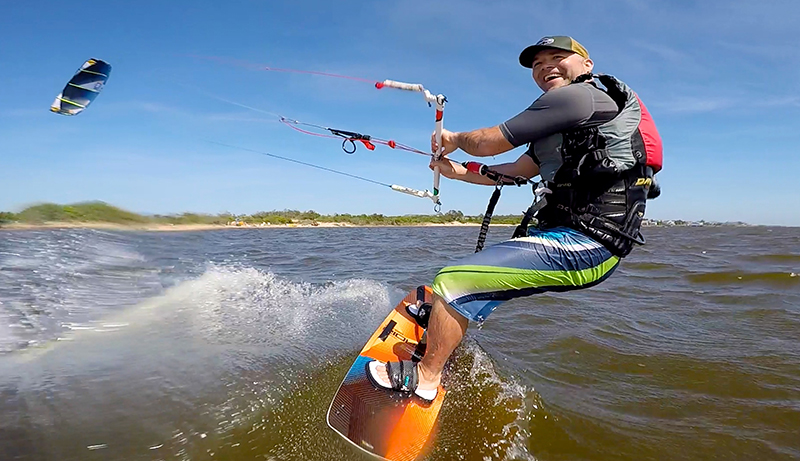 The sun was setting and the Jockey’s Ridge park gate closes at 7 p.m. Sensing that we were still interested in riding, Dimitri grabbed the car keys and moved the cars so we could ride longer. After about 30 more minutes I was spent. I was cramping, getting cold and needed to just stop. It had at that point been a 9-hour session with no more than 10 mins worth of ‘breaks’. These breaks involved secretly landing your kite, running to get a quick gulp of water and then getting back out there before being discovered. It was at this point that we got treated to the Dimitri and Mira show. And let me tell you… it was impressive. You’ve all seen the photos and the videos, but it’s a whole new level to be in the water while Dimitri jumps 30 feet over your head. But he wasn’t just riding, he was building us into the experience. We had our cameras and he would give high five’s as he flew over, splash us and shout different tips or things to watch for. Mira is one of the smoothest riders out there, it was definitely a treat to watch these two! 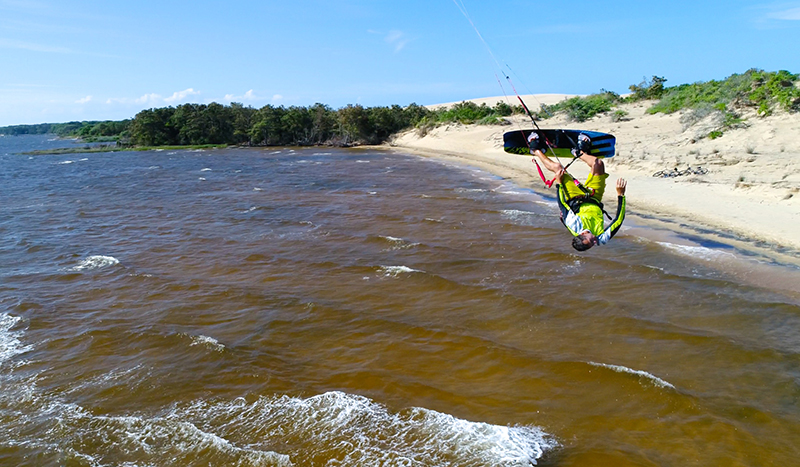 With the sun fading fast, we regrouped at Dimitri’s house, placed an order for takeout and got to watch the footage from the day(s). The motion of the water was still with me and I was certain I had a few bruises, but I was having dinner watching footage of me with Dimitri Maramenides – at his house! How rad is that?! After a delightful dinner, my eyes were drooping and it was time to hit the sack and rest up for an early session before heading back to the airport. Dimitri was heavily encouraging us to change flights as the following days were supposed to be stacked. As we were leaving Dimitri was just starting to cut a video for us to have as a souvenir. I can barely walk yet he’s just sitting down to work. I now understand why he’s often hailed as the hardest working man in the industry. 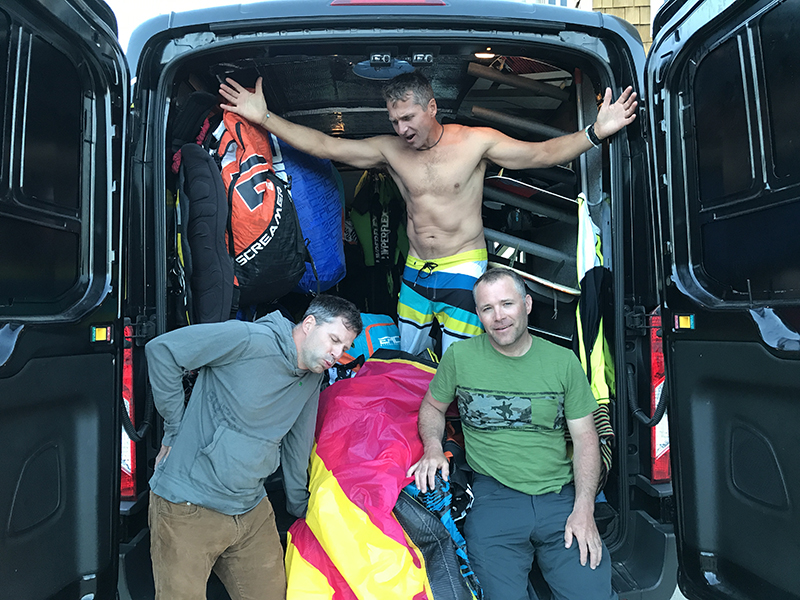 We woke early on Friday and caught a short ride before saying our good-bye’s and returning to our reality of day jobs and responsibilities. The next day however, we were reminded of the great time we had by way of pictures sent to me from Dimitri via email and a link to our movie. It’s something I’ve been watching over and over again to reflect on this breathtaking experience. It was unreal to hang out with Dimitri and experience his authentic nature, as well as the punishing rigor of the boot camp day. I’ll lick my wounds, practice what I learned and hope to be invited back next year to push my limits even further! A huge thanks go out to Dimitri for beating us to a pulp and treating us like kings! What a truly EPIC experience.