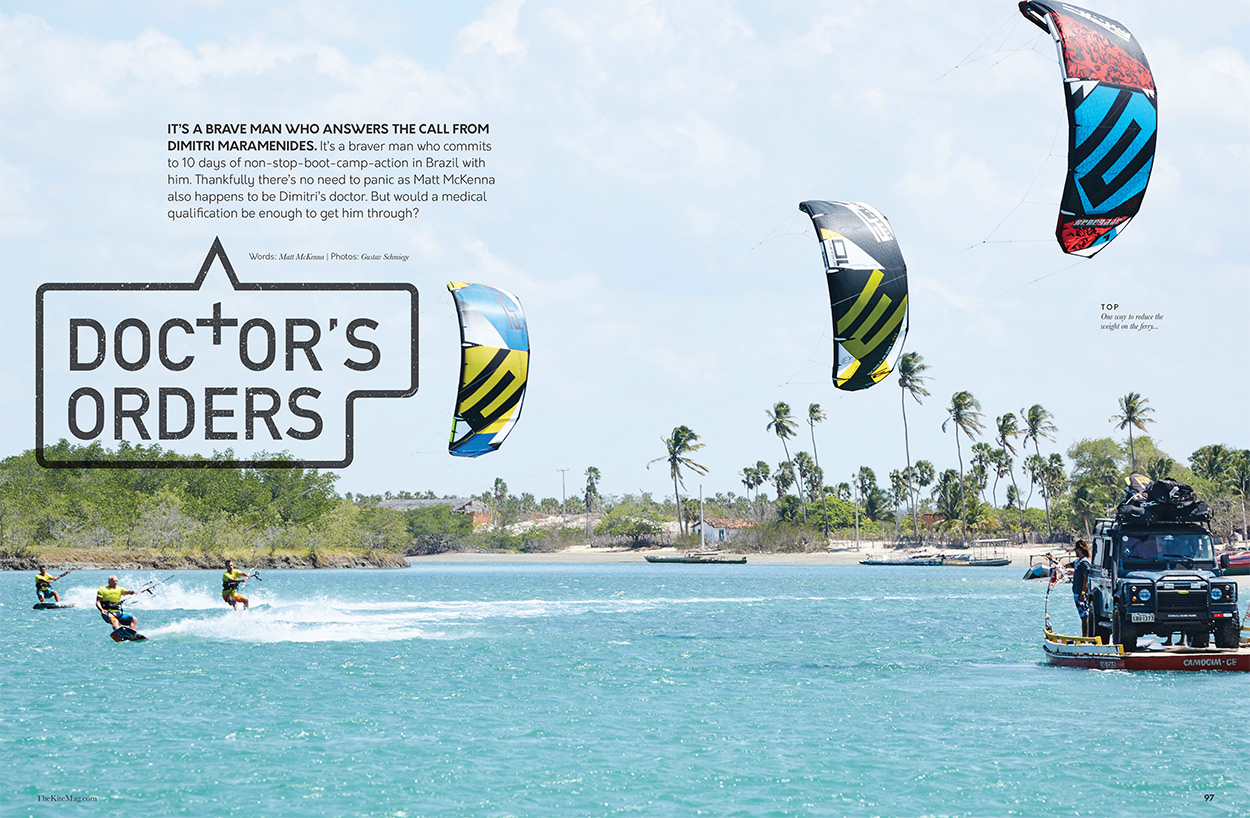 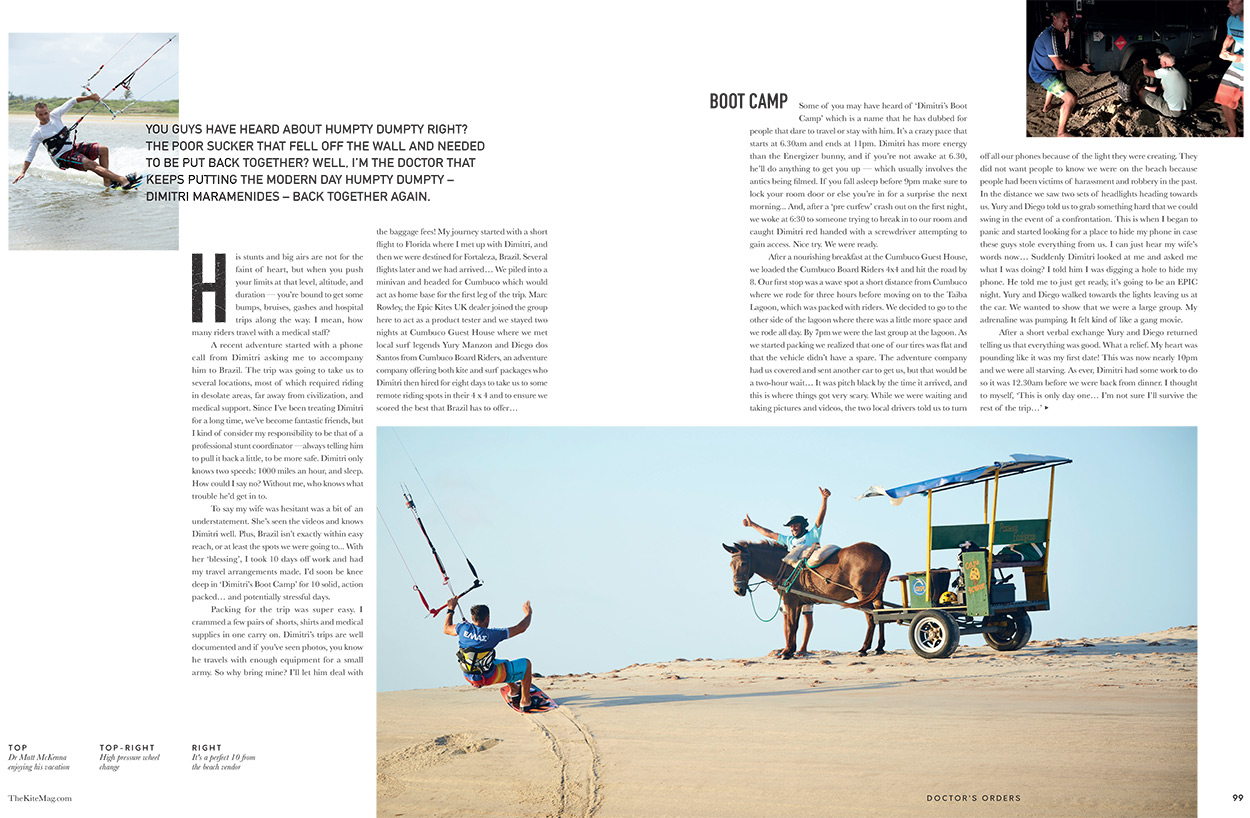 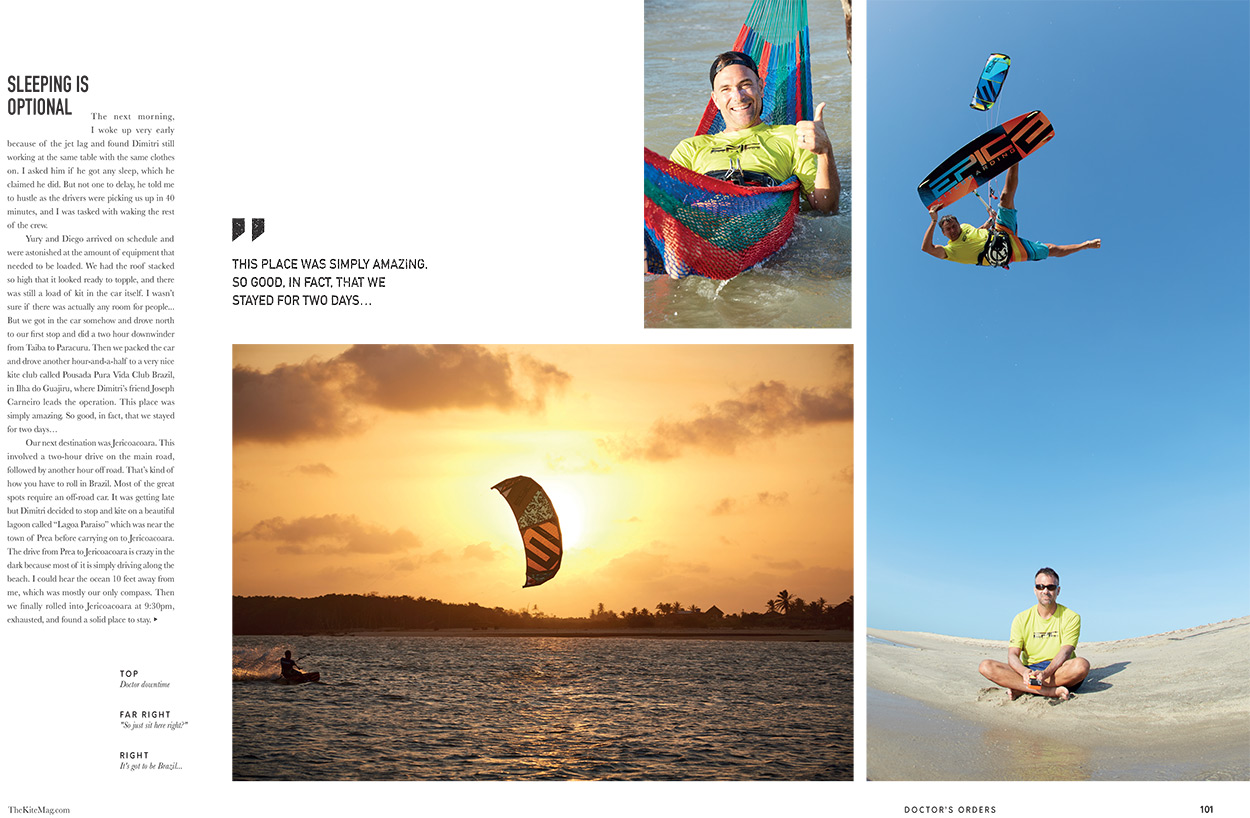 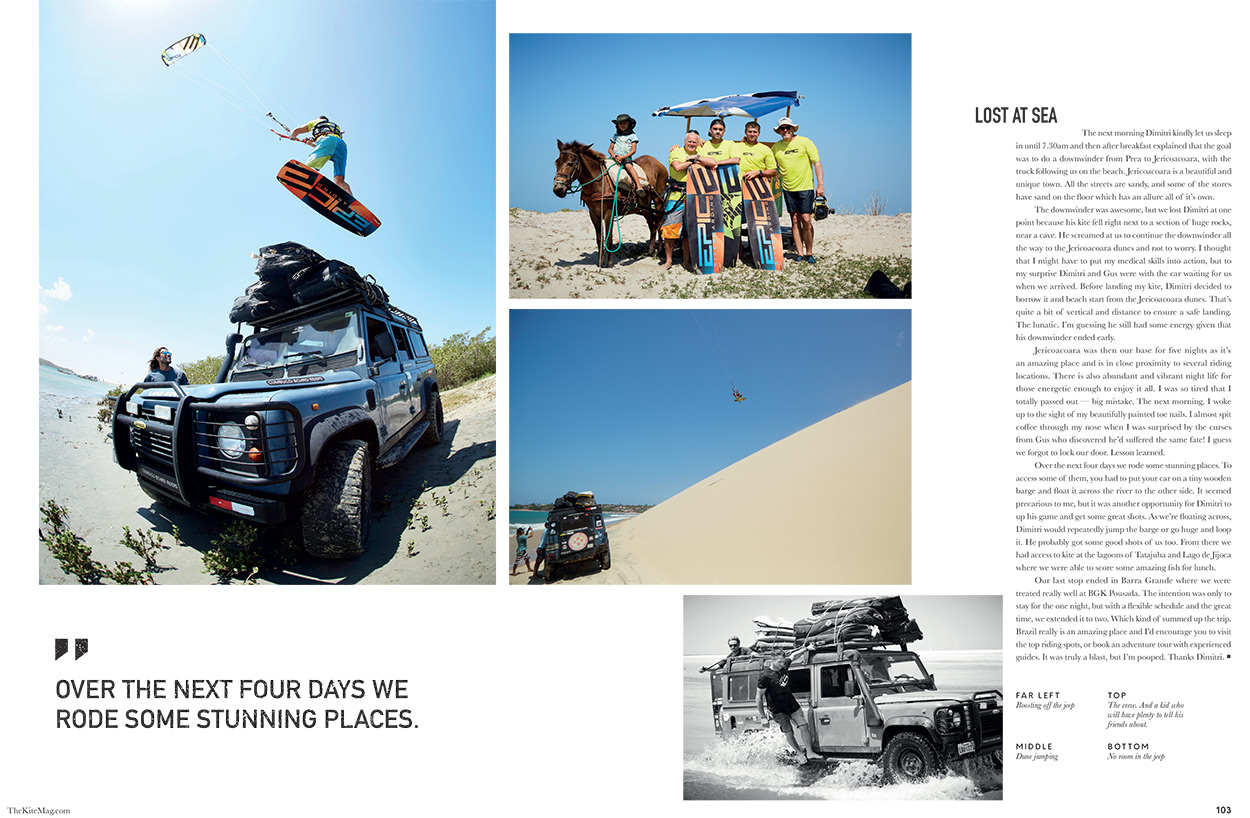 IT’S A BRAVE MAN WHO ANSWERS THE CALL FROM DIMITRI MARAMENIDES. It’s a braver man who commits to 10 days of non-stop-boot-camp-action in Brazil with him. Thankfully there’s no need to panic as Matt McKenna also happens to be Dimitri’s doctor. But would a medical qualification be enough to get him through?  Words: Matt McKenna | Photos: Gustav Schmiege

YOU GUYS HAVE HEARD ABOUT HUMPTY DUMPTY RIGHT? THE POOR SUCKER THAT FELL OFF THE WALL AND NEEDED TO BE PUT BACK TOGETHER? WELL, I’M THE DOCTOR THAT KEEPS PUTTING THE MODERN DAY HUMPTY DUMPTY – DIMITRI MARAMENIDES – BACK TOGETHER AGAIN

his stunts and big airs are not for the faint of heart, but when you push your limits at that level, altitude, and duration — you’re bound to get some bumps, bruises, gashes and hospital trips along the way. I mean, how many riders travel with a medical staff? A recent adventure started with a phone call from Dimitri asking me to accompany him to Brazil. The trip was going to take us to several locations, most of which required riding in desolate areas, far away from civilization, and medical support. Since I’ve been treating Dimitri for a long time, we’ve become fantastic friends, but I kind of consider my responsibility to be that of a professional stunt coordinator —always telling him to pull it back a little, to be more safe. Dimitri only knows two speeds: 1000 miles an hour, and sleep. How could I say no? Without me, who knows what trouble he’d get in to. To say my wife was hesitant was a bit of an understatement. She’s seen the videos and knows Dimitri well. Plus, Brazil isn’t exactly within easy reach, or at least the spots we were going to... With her ‘blessing’, I took 10 days off work and had my travel arrangements made. I’d soon be knee deep in ‘Dimitri’s Boot Camp’ for 10 solid, action packed… and potentially stressful days. Packing for the trip was super easy. I crammed a few pairs of shorts, shirts and medical supplies in one carry on. Dimitri’s trips are well documented and if you’ve seen photos, you know he travels with enough equipment for a small army. So why bring mine? I’ll let him deal with the baggage fees! My journey started with a short flight to Florida where I met up with Dimitri, and then we were destined for Fortaleza, Brazil. Several flights later and we had arrived… We piled into a minivan and headed for Cumbuco which would act as home base for the first leg of the trip. Marc Rowley, the Epic Kites UK dealer joined the group here to act as a product tester and we stayed two nights at Cumbuco Guest House where we met local surf legends Yury Manzon and Diego dos Santos from Cumbuco Board Riders, an adventure company offering both kite and surf packages who Dimitri then hired for eight days to take us to some remote riding spots in their 4 x 4 and to ensure we scored the best that Brazil has to offer…

BOOT CAMP
Some of you may have heard of ‘Dimitri’s Boot Camp’ which is a name that he has dubbed for people that dare to travel or stay with him. It’s a crazy pace that starts at 6.30am and ends at 11pm. Dimitri has more energy than the Energizer bunny, and if you’re not awake at 6.30, he’ll do anything to get you up — which usually involves the antics being filmed. If you fall asleep before 9pm make sure to lock your room door or else you’re in for a surprise the next morning... And, after a ‘pre curfew’ crash out on the first night, we woke at 6:30 to someone trying to break in to our room and caught Dimitri red handed with a screwdriver attempting to gain access. Nice try. We were ready. After a nourishing breakfast at the Cumbuco Guest House, we loaded the Cumbuco Board Riders 4x4 and hit the road by 8. Our first stop was a wave spot a short distance from Cumbuco where we rode for three hours before moving on to the Taiba Lagoon, which was packed with riders. We decided to go to the other side of the lagoon where there was a little more space and we rode all day. By 7pm we were the last group at the lagoon. As we started packing we realized that one of our tires was flat and that the vehicle didn’t have a spare. The adventure company had us covered and sent another car to get us, but that would be a two-hour wait… It was pitch black by the time it arrived, and this is where things got very scary. While we were waiting and taking pictures and videos, the two local drivers told us to turn off all our phones because of the light they were creating. They did not want people to know we were on the beach because people had been victims of harassment and robbery in the past. In the distance we saw two sets of headlights heading towards us. Yury and Diego told us to grab something hard that we could swing in the event of a confrontation. This is when I began to panic and started looking for a place to hide my phone in case these guys stole everything from us. I can just hear my wife’s words now… Suddenly Dimitri looked at me and asked me what I was doing? I told him I was digging a hole to hide my phone. He told me to just get ready, it’s going to be an EPIC night. Yury and Diego walked towards the lights leaving us at the car. We wanted to show that we were a large group. My adrenaline was pumping. It felt kind of like a gang movie. After a short verbal exchange Yury and Diego returned telling us that everything was good. What a relief. My heart was pounding like it was my first date! This was now nearly 10pm and we were all starving. As ever, Dimitri had some work to do so it was 12.30am before we were back from dinner. I thought to myself, ‘This is only day one… I’m not sure I’ll survive the rest of the trip…’

SLEEPING IS OPTIONAL
The next morning, I woke up very early because of the jet lag and found Dimitri still working at the same table with the same clothes on. I asked him if he got any sleep, which he claimed he did. But not one to delay, he told me to hustle as the drivers were picking us up in 40 minutes, and I was tasked with waking the rest of the crew. Yury and Diego arrived on schedule and were astonished at the amount of equipment that needed to be loaded. We had the roof stacked so high that it looked ready to topple, and there was still a load of kit in the car itself. I wasn’t sure if there was actually any room for people... But we got in the car somehow and drove north to our first stop and did a two hour downwinder from Taiba to Paracuru. Then we packed the car and drove another hour-and-a-half to a very nice kite club called Pousada Pura Vida Club Brazil, in Ilha do Guajiru, where Dimitri’s friend Joseph Carneiro leads the operation. This place was simply amazing. So good, in fact, that we stayed for two days… Our next destination was Jericoacoara. This involved a two-hour drive on the main road, followed by another hour off road. That’s kind of how you have to roll in Brazil. Most of the great spots require an off-road car. It was getting late but Dimitri decided to stop and kite on a beautiful lagoon called “Lagoa Paraiso” which was near the town of Prea before carrying on to Jericoacoara. The drive from Prea to Jericoacoara is crazy in the dark because most of it is simply driving along the beach. I could hear the ocean 10 feet away from me, which was mostly our only compass. Then we finally rolled into Jericoacoara at 9:30pm, exhausted, and found a solid place to stay
THIS PLACE WAS SIMPLY AMAZING. SO GOOD, IN FACT, THAT WE STAYED FOR TWO DAYS…
TOP Doctor downtime
FAR RIGHT "So just sit here right?"
RIGHT It's got to be Brazil...

LOST AT SEA
The next morning Dimitri kindly let us sleep in until 7.30am and then after breakfast explained that the goal was to do a downwinder from Prea to Jericoacoara, with the truck following us on the beach. Jericoacoara is a beautiful and unique town. All the streets are sandy, and some of the stores have sand on the floor which has an allure all of it’s own. The downwinder was awesome, but we lost Dimitri at one point because his kite fell right next to a section of huge rocks, near a cave. He screamed at us to continue the downwinder all the way to the Jericoacoara dunes and not to worry. I thought that I might have to put my medical skills into action, but to my surprise Dimitri and Gus were with the car waiting for us when we arrived. Before landing my kite, Dimitri decided to borrow it and beach start from the Jericoacoara dunes. That’s quite a bit of vertical and distance to ensure a safe landing. The lunatic. I’m guessing he still had some energy given that his downwinder ended early. Jericoacoara was then our base for five nights as it’s an amazing place and is in close proximity to several riding locations. There is also abundant and vibrant night life for those energetic enough to enjoy it all. I was so tired that I totally passed out — big mistake. The next morning, I woke up to the sight of my beautifully painted toe nails. I almost spit coffee through my nose when I was surprised by the curses from Gus who discovered he’d suffered the same fate! I guess we forgot to lock our door. Lesson learned. Over the next four days we rode some stunning places. To access some of them, you had to put your car on a tiny wooden barge and float it across the river to the other side. It seemed precarious to me, but it was another opportunity for Dimitri to up his game and get some great shots. As we’re floating across, Dimitri would repeatedly jump the barge or go huge and loop it. He probably got some good shots of us too. From there we had access to kite at the lagoons of Tatajuba and Lago de Jijoca where we were able to score some amazing fish for lunch. Our last stop ended in Barra Grande where we were treated really well at BGK Pousada. The intention was only to stay for the one night, but with a flexible schedule and the great time, we extended it to two. Which kind of summed up the trip. Brazil really is an amazing place and I’d encourage you to visit the top riding spots, or book an adventure tour with experienced guides. It was truly a blast, but I’m pooped. Thanks Dimitri.
OVER THE NEXT FOUR DAYS WE RODE SOME STUNNING PLACES.
FAR LEFT Boosting off the jeep
MIDDLE Dune jumping
TOP The crew. And a kid who will have plenty to tell his friends about.
BOTTOM No room in the jeep